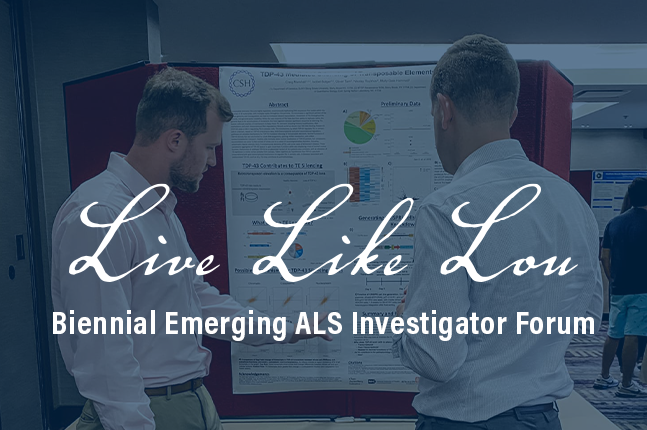 The LiveLikeLou Foundation hosted its biennial Emerging ALS Investigator Forum July 14-16, in Scottsdale, Arizona, in partnership with the Barrow Neurological Institute and University of Pittsburgh. The invitation-only event brought together seventy-four emerging scientists in the ALS basic research field from twenty-four universities across North America to share emerging scientific ideas and methodologies.

“ALS research is underfunded and competition for research dollars is high,” noted Gaylon Morris, LiveLikeLou Board of Trustees Vice Chair and Scientific Research Committee Chair. “This leaves early-career scientists without sufficient support to pursue important new ideas critical to making progress on the disease. This forum gives investigators a unique opportunity to share their research and collaborate on their hypotheses—making their theories even more competitive when seeking future funding,” he continued.

Supported by a $130,000 grant from LiveLikeLou, the three-day program was developed by an esteemed group of ALS researchers and LiveLikeLou Scientific Research Committee members:

Noting the lack of a current ALS treatment or cure, Suzanne encouraged the researchers to “keep networking and learning, imagining, and sharing, asking the hard questions, and fighting for your ideas. So that the next father, husband, brother, or daughter who gets the diagnosis of ALS has a chance to live.”

Christine Vande Velde, PhD, from the University of Montreal, served as the forum keynote and shared her research on stress granules in ALS. Her study of RNA binding proteins such as TDP-43 have fueled integral insights into familial ALS, which can devastate multiple members of a single family across generations. Dr. Vande Velde’s presentation was then followed by dozens of abstract presentations from scientists, who invited questions and suggestions to strengthen their research.

The final evening featured a gallery walk of scientific posters from each of the attendees, giving them yet another chance to engage in discussions about their research. Attendees remarked they were thankful for the opportunity to share their ideas and collaborate with one another.

Poster presentation winners were announced at the closing session:

“After a two-year delay, LiveLikeLou was excited to host this in-person forum again,” shared LiveLikeLou Executive Director Wendy Faust. “These face-to-face conversations are important if we are going to find treatments or a cure for ALS. We’re already thinking ahead on how we can make the 2024 LiveLikeLou Emerging ALS Investigator Forum even more impactful.”

The 2022 forum was also made possible by generous donors and friends who sponsored attendees. LiveLikeLou extends its sincere gratitude to: