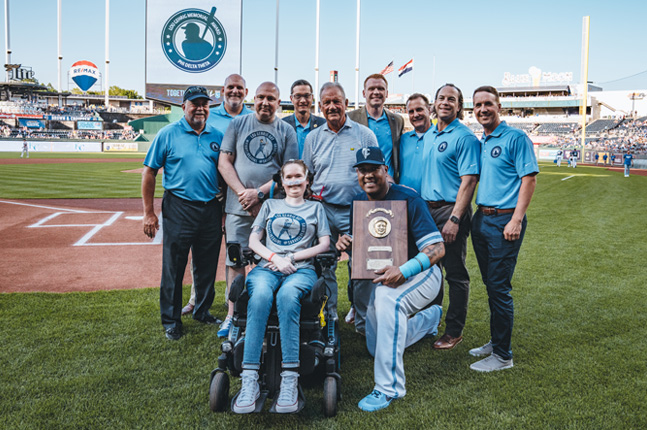 In 2021, Major League Baseball announced it would celebrate Lou Gehrig Day league-wide annually on June 2. The date was selected to honor the date Lou became the Yankees’ starting first baseman, thus cementing the start of his incredible streak of 2,130 consecutive games played. It is also the day he passed from complications of ALS in 1941.

For many closely associated with amyotrophic lateral sclerosis (ALS), Lou Gehrig Day creates a heightened awareness of the disease and provides hope that continued funding and research will lead to treatments and a cure.

Phi Delta Theta and the LiveLikeLou Foundation worked with five Major League Baseball teams to be a part of their 2022 Lou Gehrig Day celebrations, with 450 Phi Delts, friends, and supporters joining in on the celebrations.

At Kansas City’s Kauffman Stadium, on June 3, Phis and their guests honored this year’s Lou Gehrig Memorial Award winner, Salvador Pérez of the Kanas City Royals. Phi Delta Theta presents the award annually to a Major League Baseball player who best exemplifies the giving character of Hall of Famer Lou Gehrig, a member of the Fraternity’s Columbia University chapter. First presented in 1955, the award is permanently maintained at the National Baseball Hall of Fame and Museum in Cooperstown, New York.

In addition to the Gehrig Award presentation, Phi Delta Theta, the LiveLikeLou Foundation, and the Permobil Foundation presented a customized wheelchair to lifelong Royals fan Matt Enyart between innings. They also surprised Maya Bulmer of Tulsa, Oklahoma, with an Iron Horse Scholarship for her collegiate pursuits.

On June 9, the Giants played the Colorado Rockies for Lou Gehrig Day which provided opportunity for both teams to honor players and their loved ones impacted by ALS. Jim Poole was a pitcher for the Giants in the ‘90s, and his daughter threw out the first pitch. Rockies’ fielder Sam Hilliard lost his father to ALS last year, and he joined Phi Delt and LiveLikeLou on the field to celebrate Brandon Crawford from the Giants as a finalist for the 2021 Lou Gehrig Memorial Award. Brandon, the Giants’ shortstop, has been an advocate and supporter of ALS causes for many years. This esteemed group of players and ALS organizations surprised Nic Bonotto, a lifelong Giants fan, with a custom Permobil power wheelchair on field prior to the game. Nic’s three children were all born in years the Giants won the World Series! Phi Delts and friends joined us for the game and connections with the ALS community.

On June 26, the Fraternity and LiveLikeLou hosted a large group of friends, with more than 125 attendees on hand to see the White Sox take on the Orioles. Once again, Phi Delta Theta and LiveLIkeLou partnered with the Permobil Foundation to surprise ALS warrior Michelle Gutierrez on the field prior to game with a custom-branded power wheelchair. Lou Gehrig Memorial Award finalist Liam Hendriks and his wife Kristi joined the presentation team.

READ MORE ABOUT THE EXCELLENT WORK THAT SALVADOR PÉREZ, BRANDON CRAWFORD, AND LIAM HENDRIKS HAVE DONE IN THEIR COMMUNITIES

Phi Delta Theta and LiveLikeLou supporters gathered at PNC Park on June 3 for the Pirates’ Lou Gehrig Day celebrations. More than fifty Phi Delts met for a pre-game gathering and escorted ALS families heading to the game. LiveLikeLou trustees Chris Brussalis and Suzanne Alexander, along with LiveLikeLou volunteer and fundraiser Patrick Alexander, presented two grants on the field: the Iron Horse Scholarship valued at more than $17,540 to Erica Benton of Lorraine, Ohio, and a travel grant of $1,000 to Chris Donnelly and the LiveLikeLou Center for ALS research. The Pirates were generous in increasing the impact by $500 on each grant. In addition, Robert Morris University Phi Delt and Iron Phi Tyler Brinker helped local ALS Warrior Dan Duty with the first pitch.

On June 2, at Cincinnati’s Great American Ball Park, Phis and guests toured the Reds Hall of Fame, heard from leaders of the LiveLikeLou Foundation and Phi Delta Theta Fraternity, and enjoyed recap videos between innings of the game featuring past Reds recipients of the Lou Gehrig Memorial Award. An autographed Lou Gehrig Day baseball was presented to ALS warrior DJ Baker, who traveled with his wife, Carla, from Indianapolis to attend the reception and game.

At Busch Stadium, on October 13, Phi Delta Theta, the LiveLikeLou Foundation, and the Permobil Foundation presented a customized wheelchair to lifelong Cardinals fan Alan Brown before the game. More than 140 guests joined the group at Busch Stadium to support Alan and watch the Cardinals take on the Milwaukee Brewers.