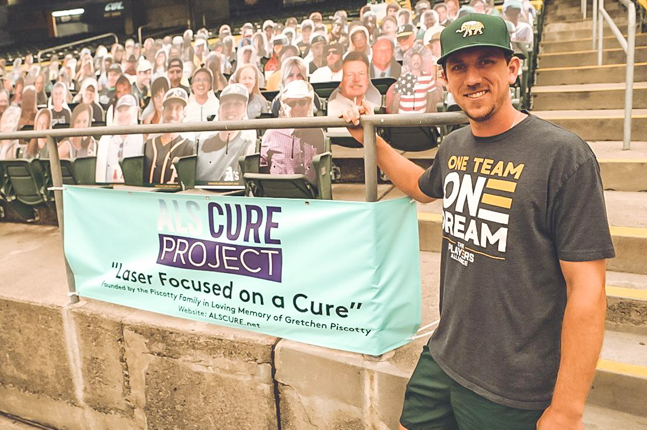 Stephen Piscotty of the Oakland Athletics has won this year’s Lou Gehrig Memorial Award, sponsored by the Phi Delta Theta International Fraternity, headquartered in Oxford, Ohio. Phi Delta Theta presents the award annually to a Major League Baseball player who best exemplifies the giving character of Hall of Famer Lou Gehrig, a member of the Fraternity’s Columbia University chapter. The award was first presented in 1955 and is permanently maintained at the National Baseball Hall of Fame and Museum in Cooperstown, New York.

Piscotty is the first member of the Oakland Athletics to win the Lou Gehrig Memorial Award. He will receive the award on June 8, prior to the A’s game against the Arizona Diamondbacks.

A LOOK AT THE HISTORY OF THE AWARD

Stephen Piscotty’s introduction to amyotrophic lateral sclerosis (ALS), also known as Lou Gehrig disease, was when his mother, Gretchen, was diagnosed with ALS in 2017, while Stephen was with the St. Louis Cardinals.

Following an offseason trade to play for his hometown Oakland A’s, Stephen moved home to the Bay Area and lived with his parents and two younger brothers. Six months after the trade, Gretchen passed away on May 6, 2018, with Stephen and the entire Piscotty family by her side.

As the A’s left for an East Coast road trip, Stephen stayed home for three days to mourn the passing of his mother with his family and closest friends. When he rejoined the club in Boston, he hit a home run over the Green Monster in his first at-bat, sparking a four-plus-month run that culminated in the best season of his career. Setting career-highs in home runs (27), RBIs (88), and WAR (3.0), Stephen, who received the 2018 BBWAA Bill Rigney Good Guy Award and 2018 Tony Conigliaro Award, overcame personal tragedy to help propel the Athletics to their first postseason appearance since 2014.

During his mother’s battle with ALS, Stephen became extremely involved with organizations dedicated to raising awareness and funds for much-needed ALS research, including the ALS Therapy Development Institute and the ALS Association’s Golden West Chapter. After Gretchen passed, Stephen, his father, and two brothers founded the ALS CURE Project, which has one goal: rid the world of ALS so no one has to suffer Gretchen’s fate. The ALS CURE Project, a 100% volunteer-based organization, leads research to support the goal of finding a cure for ALS. Since its inception, the ALS CURE Project has funded $700,000 of ALS research.

Stephen Piscotty with Sam Hilliard of the Rockies, whose dad is battling ALS

In 2018, the A’s introduced their ALS Awareness Day at the Coliseum, helping to raise awareness and funds for ALS research. In 2019, Stephen served as a spokesperson at the MLB Winter Meetings in San Diego for the MLB Winter Meetings Auction that raised funds for ALS research by auctioning items and experiences from all thirty MLB clubs. In 2020, the Piscotty family participated in the Mike Crawford Golf Tournament that featured 30 MLB players and benefited the ALS CURE Project. During the 2020 season, Stephen and his dad Mike also participated in the Bay Bridge Series Virtual Auction that included digital experiences with Stephen.

Due to the COVID-19 pandemic, the Oakland A’s were not able to welcome fans to the Coliseum during the 2020 season. The Club launched the Coliseum Cutouts program, bringing fans to the ballpark in the form of cardboard cutouts that were displayed in seats throughout the season. The A’s and the Piscotty family joined forces to introduce the ALS CURE Project Foul Ball Zone, benefiting the ALS CURE Project. The nearly 1,200 fans who purchased a cutout in this special section each received an autographed photo from Stephen, and fans who “caught” a foul ball were sent an autographed baseball.

Even while managing the full workload of being a Major League athlete, Stephen’s dedication to finding a cure for ALS has not wavered. Stephen exemplifies the spirit and character of Lou Gehrig, both on and off the field.

Stephen, a Pleasanton, California native and Stanford University grad spent the first six seasons of his professional career in the St. Louis organization before he was traded to the A’s following the 2017 season. Piscotty is a .255 hitter with 45 home runs and 161 RBI in 289 games in three seasons with Oakland after batting .268 with 38 home runs and 163 RBI in 323 games in three years with St. Louis. He has played in the postseason three times (2015, 2018, 2020) and is a .269 hitter with three home runs and six RBI in eight games. Piscotty had career highs in doubles (41), home runs (27), RBI (88), and extra base hits (68) in his first season with Oakland in 2018, while also navigating his mother’s declining health and eventual passing. He was named the Cardinals organization Minor League Player of the Year in 2015 and was rated as the Cardinals 10th-best prospect by Baseball America following the 2012 season, fourth-best following 2013 and third-best following 2014. Piscotty played in the Arizona Fall League in 2013 and was named to the AFL All-Prospects Team.

In 2020, Piscotty’s average of 5.48 at bats per RBI was the best mark of his career, and he hit .304 with runners in scoring position. He was a perfect 4-for-4 in stolen bases attempts in 2020 and is now 8-for-8 as an Athletic. Stephen walked just nine times and had 53 strikeouts; his average of 19.00 plate appearances per walk was the highest of his career and his average of 3.23 plate appearances per strikeout was the lowest. Piscotty started a team-leading 44 games in right field in 2020 and did not commit an error in 75 total chances; he now has a 192-game errorless streak dating back to his last miscue on July 24, 2018 at Texas, marking the second longest errorless streak by an outfielder in Athletics history.

Phi Delta Theta International Fraternity, in partnership with the Permobil Foundation and the LiveLikeLou Foundation, is proud to now identify and recognize finalists for its annual Lou Gehrig Memorial Award. The award’s recipient, finalists, and their respective teams will have the opportunity to surprise an individual battling ALS in their community with a brand-new, team-branded, custom Permobil wheelchair.

Phi Delta Theta Fraternity and the LiveLikeLou Foundation are proud to partner with the Permobil Foundation to help give this priceless gift of mobility to ALS patients.

Giving back was instilled in MLB-veteran Nelson Cruz at a young age by his parents, who taught him life is bigger than baseball. This summer, Cruz’s Boomstick23 Foundation (B23F) began construction on an education and technical center in his hometown of Las Matas De Santa Cruz, Dominican Republic, a place to host training for technical skills like becoming a carpenter or electrician, and how to better use farmland to produce crops. The training will provide community members with skills and a path toward employment and income stability.

Annually, Cruz brings dentists and optometrists to his hometown’s local clinic to provide checkups, medicine, and eyewear. In 2017, Cruz coordinated a five-day health event with volunteer doctors, and donated equipment and medicine, enabling more than 1,200 people to be evaluated and treated. In recent years, he also began the Healing Venezuela initiative, which helps 2,000 Venezuelan newborns annually receive life-sustaining nourishment during their first year.

In July 2020, Nelson helped lead the $400,000 donation from MLB, the MLBPA, and the Players Trust to the Dominican Republic to support medical equipment needs and battle food insecurity in the wake of the COVID-19 pandemic.

Once MLB shut down Spring Training, Tucker Barnhart returned home to Zionsville, Indiana. After being inspired to support restaurants during the pandemic, Takeout Thursday was born. That day, Barnhart purchased a $500 gift card to two local restaurants and encouraged people via social media to get takeout, up to $25 on his dime. From there, Barnhart purchased a $500 gift card to at least one different restaurant every Thursday in Zionsville or Cincinnati, further encouraged takeout orders to his followers, and inspired businesses to contribute and participate.

Throughout the year, Tucker continued to expand his community outreach. With approval from the Mayor of Indiana, he planned and hosted sandlot-style baseball games in Westfield, Indiana, gathering players ranging from high school seniors to major leaguers, benefiting Indianapolis RBI. Barnhart also participated in MLB’s Real Heroes program, a global initiative that collaborated with other professional sports leagues to salute essential workers. Not lost on Barnhart through the pandemic has been the fight for social justice and racial equality. He has been vocal on social media in support of the Black Lives Matter movement.

Posted in The Scroll NewsTagged LiveLikeLou